We’ve extended our emergency boarding cover for all customers directly impacted by the recent floods in NSW & QLD. We’ll cover all the costs of emergency boarding for pet insurance policies administered by PetSure until 31 May 2022, regardless of the policy type. Customers can submit their invoices to [email protected].

With many products including cakes, yoghurts, biscuits, and cereals containing artificial sweeteners to replace sugar, these seemingly harmless food items may be toxic to our pets. What is artificial sweetener toxicity?

Artificial sweeteners have gained popularity as sugar substitutes in a wide array of human foods as they give food a sweet taste but have less calories than actual sugar. They are essentially synthesised compounds that may have originated in natural substances like plants or even sugar itself. Some common sweeteners include aspartame, acesulfame, erythritol, saccharin, stevia, sucralose, and xylitol. Artificial sweeteners or sugar substitutes can be found in a wide array of foodstuffs including, gum, candy, diet peanut butter, ice cream, flavoured drinks, puddings, cakes or other baked items, cordials, and yoghurt. They can also be found in toothpaste.

Unfortunately, some of these sweeteners as well as other sugar substitutes (even natural ones) can be harmful to our pets when eaten, the most dangerous of which is xylitol.

Any dog or cat can be affected by artificial sweeteners if they have eaten items containing them. Dogs do tend to present artificial sweetener toxicity more commonly as they often have more of a “sweet tooth” than our feline friends, however xylitol in cats is extremely toxic so care should be taken with both dogs and cats to avoid these substances.

According to PetSure data in 2021, food toxicities were most prevalent in the following breeds:

The signs of artificial sweetener toxicity vary depending on the sweetener consumed and the quantity.

While aspartame, erythritol, saccharin, stevia, and sucralose are in small quantities generally regarded as non-toxic, large amounts can cause gastrointestinal irritation such as vomiting and diarrhoea in pets.

Xylitol however is extremely toxic in both dogs and cats. When pets consume xylitol, it causes the pancreas to release large amounts of insulin. This causes the glucose levels in the blood to dramatically decrease. Hypoglycaemia or low blood sugar can quickly become life threatening. Liver failure also occurs with xylitol toxicity.

The signs of xylitol toxicity include vomiting, weakness, collapse, loss of coordination, seizures, and unconsciousness/coma. Onset of signs can occur soon after the toxin is ingested but can also be delayed for up to 18 hours.

If you suspect your pet has consumed an item containing xylitol, this is an emergency and Vet treatment should be sought out immediately.

Depending on the time between consumption of the offending item and presentation at the Vet, the Vet may give the pet patient medication to make them vomit to help remove the material from their stomach. Signs of toxicity can occur within 30 minutes of ingestion but may also be delayed for up 18 hours.

As for many toxins, there is not a specific antidote, so the treatment is focussed on flushing the toxin from the system as well as treating the symptoms of the toxicity. Hospitalisation is typically required so that the pet patient can be placed on intravenous fluids It is also common for pets to undergo blood tests to check the glucose and potassium levels in the blood as well as to check the liver for damage. Glucose may be supplemented through the intravenous fluids when levels are low.

Medications to help protect the liver may also be prescribed. Following successful treatment, follow up blood tests may be recommended to check that the liver has not sustained long-term damage, or monitor damage that has occurred.

The prognosis for pets with xylitol toxicity is dependent on the amount consumed and the delay in receiving treatment. Unfortunately, xylitol toxicity can be a fatal condition.  If you have any doubt that your pet may have consumed any amounts of xylitol, get in touch with your Vet as soon as possible.

Artificial sweetener toxicity is generally covered by Comprehensive Accidental Injury and Illness pet insurance policies administered by PetSure (check our brand partners at petsure.com.au/partners), unless related to a pre-existing condition or exclusion. Please refer to your policy documents including Certificate of Insurance and Product Disclosure Statement for more information on whether this condition is covered under your policy.

Disclaimer: Reimbursement for these claims would be subject to limits, such as annual benefit limits or sub-limits, benefit percentage, applicable waiting periods and any applicable excess. Cover is subject to the policy terms and conditions. You should consider the relevant Product Disclosure Statement or policy wording available from the relevant provider.

2. Xylitol Toxicity: How to Keep Your Dog Safe – VRC (vrcvet.com) 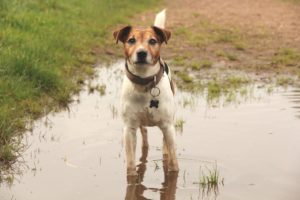 Don’t forget about the (furry) love of your life this Valentine’s Day! A guide to the colour-coded equipment you might see on dogs. Canine Parvovirus – the facts you need to know